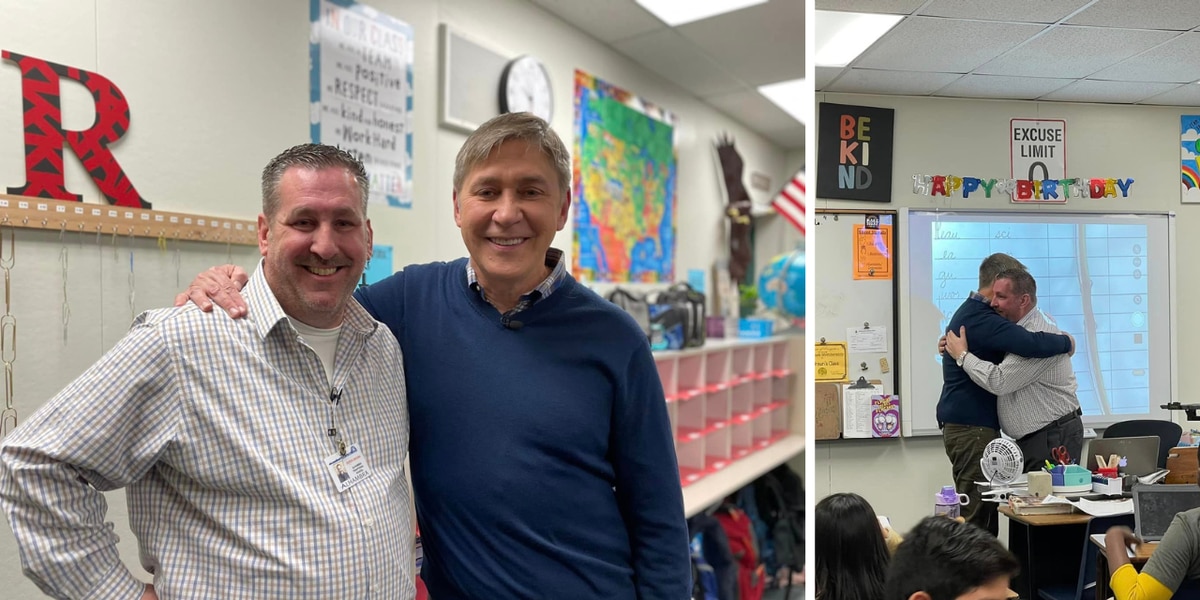 PHOENIX (3TV/CBS 5) — A special surprise this week as CBS News correspondent Steve Hartman stopped by Phoenix’s Alhambra Traditional School, where a teacher has been using his stories as part of his daily curriculum for the past 15 years.

We sat down with Hartman to talk about how his stories are used as life lessons in the classroom. Hartman is known for his simple, thoughtful features of everyday people who overcome obstacles and do amazing things. There is almost always something unexpected that will make you laugh or bring tears to your eyes. And there’s just something about how it stirs our emotions that really resonates with children.

“We stopped at the Alhambra Traditional because there is a teacher who shows all the On the Road pieces. He uses them to teach character education, social emotional learning. So we showed up and I felt like a rock star!” Hartman said.

He says that seeing his stories from the past nearly 40 years turned into lesson plans is a greater honor than any awards he’s ever won. “That surprised me. I never looked at stories like that. But now that I have a moment to think about it, yes, it makes sense because we’re going out and finding the most extraordinary Americans who are still ordinary Americans. And there are lessons to be learned from these people.”

“I see my work as restoring faith in humanity. Because the top half of the news, as important as it is, can bring people down, but it doesn’t reflect who we are,” Hartman said. For seven years, he shouldered a dart at a map, went to the first phone booth he saw in town, scoured the Yellow Pages, and unknown picked one at random to profile and prove that everyone has a story. “It changed my life in such a profound way. I was finding really important stories in everyone I pulled out of the phone book. How could that be? They’d say, ‘Wait a second, 300 million people are in America, and you’re taking me out of the phone book? You know, there’s a reason this happened. I’m going to tell you a story I’ve never told anyone before.”

READ ALSO :   The 10th annual Canal Convergence is underway at the Scottsdale Waterfront

And he has kept in touch with almost all of them. “People trust me with their story and trust me to tell their story to the nation. That was all I cared about for a whole week of my life. And some people, you know, once a year, or I’ll go to them if I haven’t heard from them. And to some people I’ve made stories about, when I hang up the phone, I say ‘I love you’. And I really do,” Hartman said.

He has traveled millions of miles for his “On the Road” features. And during the pandemic her children anchored the lessons of Kindness101. He has taken home nearly every journalism award: an Alfred I. DuPont-Columbia University Award, three National Emmy Awards and nine RTNDA/Edward R. Murrow Awards. “What I’m proud of is that teachers show stories in schools across the country, and they invite me into that sacred space and use me to teach a lesson. Not me, the subjects of the stories. That is the highest honor,” Hartman said.

A truly humble worker, Hartman edits all the stories himself, obsessing over the smallest details and even the sound clips. He says he likes to go unprepared but curious and tries to pay as little attention to the cameras and story mechanics as possible, so that his subjects are as open and unguarded as possible.

On the subject of his latest story, that Phoenix teacher began his career before educating our next generation here at CBS 5 as a producer. “His name is Derrick Brown. He knows my archive better than I do!’ Hartman said. “One day he will show a story in the classroom and use it to teach a lesson. It’s very eloquent you know, ‘This story teaches this subject’. I didn’t even think about it, but you know, he’s my head librarian now”.

“I think this might be my goal,” Hartman added. “Sometimes I think maybe I neglected what I do. Well, it’s the latest news story. You know how important it could be? Now I know kids in classrooms are watching this. I think that could be my goal.”

READ ALSO :   Do State of the Union speeches still matter?

“I think maybe that’s why I had to do what I do, because if kids come out of middle school or elementary school with strong character, they’re going to find love and, and happiness and friendship and along the way, I hope, ‘I’m going to make the world a better place,'” she said. .

Brown says he never grew up idolizing athletes, so Hartman’s visit was the best surprise ever. He says he tells students it’s up to them to take those life lessons and stories that speak to their hearts and put them into action.

Brown is one of more than 5,000 teachers in the Kindness 101 Facebook group for teachers, where educators share lesson plans and curriculum based on Hartman’s stories. Hartman and her producer Jessica Opatich help moderate and encourage educators to continue spreading these simple lessons, expanding our collective empathy, one story at a time.