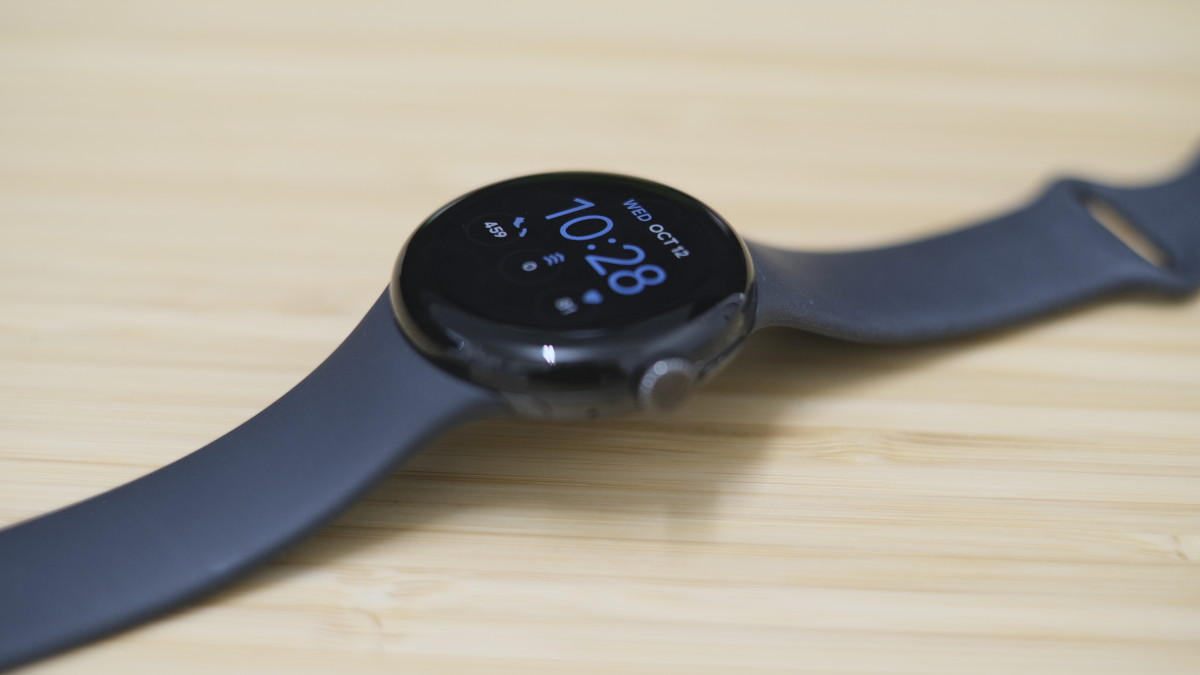 We’ve been hearing about Google releasing the Pixel Watch for years now. There’s been a lot of hype about Google wading into the smartwatch waters, and rightfully so. At the moment, Android users are left with very few viable options, specifically from Samsung’s Galaxy Watch lineup.

Google has made good on that promise by offering the $349 Pixel Watch alongside the Pixel 7 and Pixel 7 Pro. For the past week, I’ve been using Google’s first Pixel Watch — a device many hope will give Android users their version of the Apple Watch — for about a week.

While it’s a far cry from the Apple Watch caliber, there’s a lot to like, some not to like, and plenty of potential left over from the first Google smartwatch.

Traditional design with a modern spin

I’m going to get this out of the way now – I love the design of the Pixel Watch. The pure black face of the watch that blends the bezels and the screen into a smooth surface looks great, even in direct sunlight or in the dark. The case is made of stainless steel and comes in matte black, brushed silver, or champagne gold color options.

The screen, as well as the entire watch case, is not very large. This is my biggest complaint about the design. It is very small. The entire watch measures 41mm in diameter, with the screen being even smaller, measuring 30.48mm – or 1.2in.

The Pixel Watch looks like a traditional watch thanks to its round case and crown that swivels or acts as a button to navigate across the face. There is a side button, just above the crown, somewhat hidden that adds another navigation option, above the touch screen of course.

There are many different strap options, many of which look very similar to Apple’s own Apple Watch bands — but it’s hard to be mad about it. Google has developed a somewhat unique way to attach the bands to the Pixel Watch case, and it takes some practice to get the hang of it. Google likens the attachment method to how fancy camera lenses are attached to the camera body, as they slide and lock into place.

Easy band removal. Click a button on the right side of the bar and slide it to the right. However, wearing the band is a little trickier. The key is to press and hold the button, then place the edge of the bar over it and move it to the left. I’m not sure that makes sense now that I’ve read it myself. Rest assured, Google displays a brief animation shortly after setting up the watch that walks you through the process.

At the bottom of the Pixel Watch, you’ll find all the standard health sensors now common in any smartwatch. There’s a heart rate monitor, a Sp02 sensor for blood oxygen levels, and you can take an electrocardiogram using a set of bottom sensors and put your finger on the side of the crown — which is exactly how it works on the Samsung Watch, Galaxy Watch, and Apple Watch.

The bottom of the watch is also where you place the included magnetic charger, similar to how Samsung and Apple Watch charge the Galaxy Watch. Google claims that you can charge the Pixel Watch to 50% in 30 minutes, or fully charge in about 80 minutes. This more or less matches my experience.

Android watch from someone other than Samsung

As I mentioned earlier, there is a lot of pressure on Google to deliver a WearOS experience that ideally exceeds or at least puts pressure on Samsung to develop a better Android watch. Don’t get me wrong, the Galaxy Watch 5 is a great smartwatch, but it relies heavily on Samsung software and services, and if you don’t have a Samsung phone, it can be frustrating.

The Pixel Watch runs WearOS 3.5 out of the box, and it’s packed with many Google apps and services. And you’ll need to pair it with an Android smartphone running Android 8 or later. Shortly after setting up the Pixel Watch, I used Google Maps on my wrist to go to a local restaurant in Brooklyn—something I often do when traveling, so I don’t always stare at my phone while I’m walking around. You can also control Google Home devices right from your wrist, or summon the Google Assistant with a long press of the side button to set an alarm, play music, or get directions.

Google Wallet is also available on the Pixel Watch. I used Google Wallet to buy a cup of coffee with the tap to pay at some point, but was disappointed to see that my boarding passes didn’t carry over to the watch. We hope this feature will be added in the future. To be fair, Samsung’s Galaxy Watch doesn’t have boarding passes either; I was just hoping that Google would bring this feature to the Pixel Watch.

I’ve been enjoying using Samsung’s Galaxy Watch offerings for the past few years, but after a week with the Pixel Watch and a streamlined WearOS experience, I think I’ve been converted.

As for battery life, well, you’ll need to get used to charging your Pixel Watch every day. It has just enough juice to track your activities, put notifications on your wrist and even monitor your sleep habits, but once you wake up, you’ll have to put it on the charger. I usually wake up in the morning with less than 10% charge remaining, and at its lowest I woke up with only 2% battery life remaining.

That’s with the always-on display enabled, something Google warns will run into the battery. It doesn’t take long to recharge the battery, so this is a plus. I was able to put it on the charger while I was getting ready for the day, take my kids to school and be back to a fully charged watch in less than an hour.

The interface of Pixel Watch is easy to use and intuitive. If you swipe left or right across the watch face, you’ll see one of the various boxes to display information like the current weather, Google Map shortcuts to home or work, or start a Fitbit workout. A swipe down on the watch face reveals all the quick settings and this is where I also found out that the sleep time mode button is there. When enabled, it turns off the Pixel Watch’s display while you sleep, which helps save battery life and eliminates the bright screen that wakes you up at night in the process.

Fitbit but with another name

Google’s acquisition of Fitbit has increased pressure and expectations for the Pixel Watch. Fitbit entered Google with a respected track record of creating premium fitness trackers, but with a mixed history of creating smartwatches.

With the Pixel Watch, there are a lot of Fitbit features built into it. It, of course, tracks your steps, heart rate, sleep, and workouts. You can take an electrocardiogram (ECG) to check for an irregular heartbeat, too.

All health-related features currently available on the Pixel Watch work as you’d expect. You start a workout, the watch tracks it, and then records it in the Fitbit app where you can see your stats and progress.

However, the Pixel Watch launched without some of the basic Fitbit features that users have come to expect. For example, even though it is equipped with a blood oxygen sensor, you cannot take the reading at the moment. The Pixel Watch also has a fall detection feature that can call for help if you detect a fall, but that’s also missing from the current capabilities. For comparison, the Apple Watch and Galaxy Watch already support both.

Another feature missing in the traditional sense is automatic exercise detection. Instead of telling you when you forgot to start a workout and asking you if you want to record it, the Pixel Watch will instead record the activity after the fact, without ever alerting you.

For example, if you go for a long walk and forget to start an outdoor walking workout on the watch, you’ll likely see the walk recorded in the Fitbit app after you’re done. However, there is no guarantee that it is being tracked, as the watch looks for indicators such as high heart rate and other factors to passively log activity.

The ability to start, stop, or pause workouts is a major selling point for Fitbit devices. Is lack of support on Pixel Watch spoiling deals? Most likely not. You’ll just need to get used to starting the exercises manually, or trust enough hours to keep track of the exercises in the background.

My biggest take away about the Pixel Watch and its health features is a fairly simple one – I use my sleep goals to create an alarm on the watch that gently wakes me up in the morning. There is currently an option in the Fitbit app for bedtime reminders, however, you can’t set an alarm. This seems to be the obvious advantage that Fitbit devices currently have. Why it isn’t included in the Pixel Watch doesn’t make sense to me.

To get the most out of your Fitbit integration, you’ll likely want to sign up for Fitbit Premium, a service that unlocks workouts and diet tracking for $80 a year. However, Google does include 6 months of Fitbit Premium with every Pixel Watch.

Conclusion: Is the Pixel Clock worth it?

Google’s Pixel Watch is pretty much a first generation product. There are a lot of features that Google and the WearOS team introduced, like Google Maps or Google Home integration, but then there are things missing that make you scratch your mind — like the lack of boarding passes in the Wallet app. Maybe the screen is too small to accurately display the QR code for airline scanners? Who knows.

Then there’s the close integration with Fitbit and health features that are full of promise, but the lack of core capabilities like the Sp02 at launch leaves you guessing at Google’s decision making.

With any first-generation product, there is a tendency for the press and users alike to give a partial pass-through to errors, adjusting them to lessons learned in the hope that the second iteration will correct the path. With the Pixel Watch, apart from battery life and overall size, most of the issues I have with the experience are software related. With that in mind, the Pixel Watch has plenty of room to grow into the I watch, which I’m sure many others were hoping for on launch day. But, here’s the problem: I’ve never advocated that you should buy a product based on what it is could be, but what it is today.

With that in mind, if you’re looking for an Android smartwatch to go with your Android phone, no matter who made it, and the Samsung Galaxy Watch lineup isn’t attractive — the Pixel Watch delivers on its WearOS promise. If you are looking for a smartwatch that focuses on fitness and also talks to work with Android, then perhaps the Galaxy Watch 5 or even the latest Garmin is the best choice for you. So far.