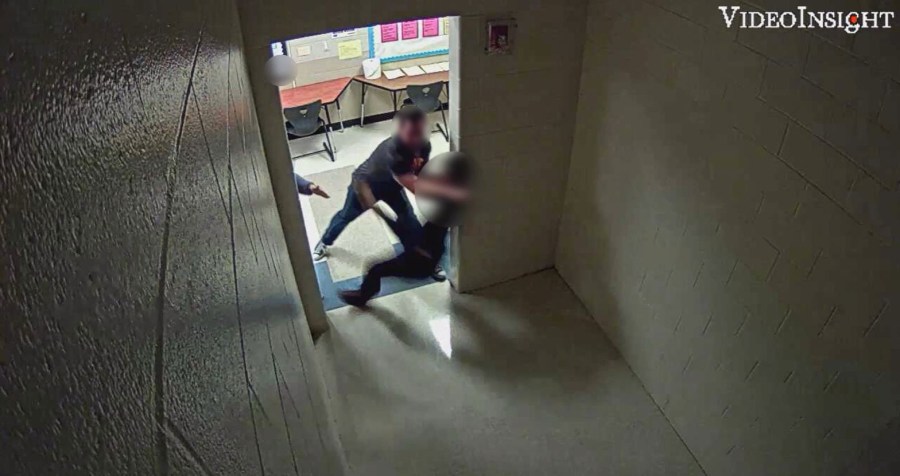 Round Rock, Texas (KXAN) – An administrator at a school for special education students in Round Rock, Texas, who no longer works, was caught on surveillance video grabbing a 14-year-old student and then throwing him into a room where the student hit him in the head. on the wall

Since May, the Texas Education Agency has said it is investigating the administrator for misconduct, though the agency said it could not share the nature of the investigation.

The Round Rock Independent School District says its investigation is complete, but the outcome is confidential to personnel.

District officials said the administrator is still working on administrative projects at the central office and is no longer assigned to the campus where the incident occurred.

The student’s mother, Tatiana Alfano, provided email records showing that on the day of the incident, school officials sent her son to a “cool-down room” at the district’s Goals Learning Center, a campus for special needs students with primary disabilities. Emotional disturbance.

According to an email from the school’s director of special education behavior services, the student was sent to the classroom for “yelling at the teacher and using profanity toward the teacher.” Hallway surveillance video shows the student trying to get past two female teachers to get back into the classroom. The teachers took him by the arms and took him to the cool-down room.

A second video shows the student leaning against the wall of the cool-down room with his hands, while two teachers stand at the door for more than a minute. Immediately, the administrator goes to the door where the teachers are standing.

READ ALSO :   Authorities have released surveillance video of a Miami boy who went missing from a Maine Walgreens

The video shows that after the student hit the wall with his head, he got up and started gesturing toward the employees in a punching motion. The recording did not show the student hitting any staff members. A school report on the incident said the student spat in the face of a staff member after hitting him in the head.

Immediately, the video shows two employees, including an administrator, holding the student on the floor for more than four minutes. He can be heard shouting, “I hate it here.”

The administrator did not respond to our requests for comment.

KXAN obtained this Round Rock ISD surveillance footage from the mother of the student featured in it. It was originally obtained by the family’s attorney during this case and confirmed by the district. Warning: This contains video that some viewers may find sensitive.

In an email from the special education director to the student’s mother that day, administrators said “staff moved him back to the cool down room. He fell and hit his head.

Ten days after the incident, according to email records, Alfano viewed the surveillance video.

READ ALSO :   Wall Street strategists are split on whether the stock market will crash or rally 20% ahead of next week's Fed meeting. Here are 6 market experts.

“I thought it was a discipline issue that I had to follow at home and I was ready to do it, but [my son] ‘No, you are not listening, mother. He threw me into the wall — and I fired him, too,” Alfano said. “I think he was very relieved.”

“I felt guilty,” she added.

Records show the district reported the incident to the Texas Department of Children and Families on May 10 — the day after Alfano viewed the video. The Texas Education Agency, the State Board of Educator Certification, received a report about the administrator from the district the following day, May 11.

“Why does it have to wait until I see it?” Alfano asked.

“Reporting time,” a Round Rock ISD spokeswoman said Monday [is] It doesn’t matter when parents watch the video. Reports are prepared as soon as the district administration has the necessary information through enquiry.

Records show the Texas Department of Children and Families has already denied abuse.

“I have complained. I walked up to the chain and a lot of people told me it wasn’t abuse because the definition of abuse has changed over the last few years,” Alfano said. “The result is that he did not suffer enough to qualify for abuse.”

Alfano believes it was illegal for a school official to prevent his son from leaving the “cool-down room.”

The Texas Education Code defines “time out” as the legal term for the practice of isolating students, especially those with special needs.

READ ALSO :   As the police said

The law prevents school officials from locking the door to the premises or physically blocking an exit. TEA guidelines also state that students should not be “physically prevented from leaving.”

Alfano has hired an attorney and said the incident has led to her seeking policy and legislative changes that would require districts to bring in mental health professionals after a period of restraint or time out.

A 2020 study by the advocacy organization Disability Rights Texas found that students with disabilities in Texas experienced 91% of all reported restrictions.

“I would take the whole world for my son. I feel the same way about where I am right now. I want to make legislative changes to protect … and now, as I said, it’s bigger than just that [my son],” Alfano said.