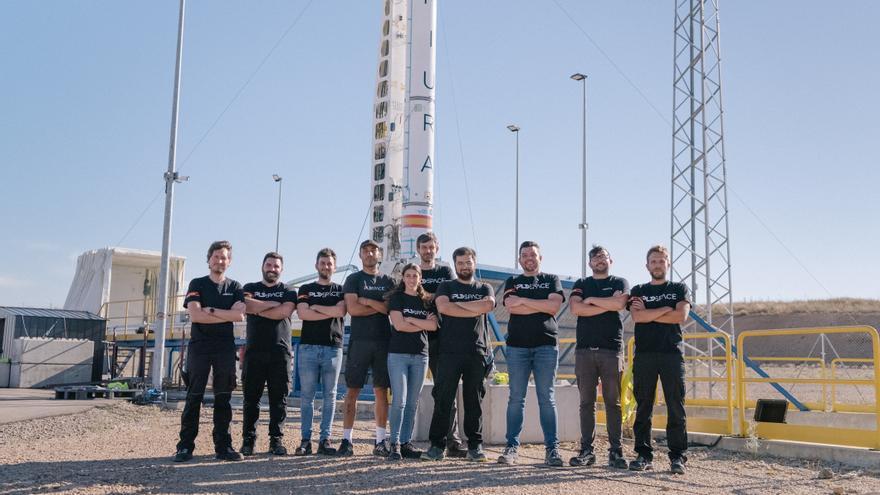 New milestone for the ilicitana PLD Space. The company chaired by Ezequiel Sánchez has achieved successfully complete the flight mission rehearsal, which means that its first rocket, the Miura 1, is now ready to fly, according to the company itself on its social networks. In this way, the signature becomes the first european company of microlaunchers to achieve it.

With this test, the company ends the first qualifying campaign of its suborbital rocket, that is, the tests that have the objective of ensure that all aircraft subsystems are working properly to finally perform a complete combined test. Although PLD Space had already tested and validated each of these subsystems that make up the launch vehicle, it had not yet tested all of them integrated, which is a definitive step to continue advancing, as explained by the firm.

Specifically, this campaign has consisted of several validation tests of operation and three static ignitions (also called “hot test” or static tests): five, 20 and 110 seconds (it has been reduced from 122 to 110 to guarantee a safe shutdown of the engine, leaving a margin of fuel on board). The latter, known as flight mission testis key to the future of the vehicle because simulates all the conditions of a real launch, only without flying. “We make the rocket truly think you’re on your way to space“, comments the co-founder, CEO and launch director of PLD Space, Raul Torres.

This test of 110 seconds This is roughly equivalent to the time the engine stays on in an actual launch. Its main purpose is to check the correct operation of all subsystems during a simulated flight. With the information obtained in the different tests, the PLD Space team has been able to verify that each of the parts of the rocket works as expected or, if not, take advantage of that data to fine-tune all the parameters of the first flight unit.

For example, as reported by the company’s managers, during a test carried out on July 19, which had to be aborted after six seconds, a fault was detected in the oxygen tank pressurization. A problem that has already been solved thanks to the information obtained with the test.

If all goes according to plan, the launch of the rocket will occur at end of the year from its base in El Arenosillo, in Huelva. Thus, the firm has already started manufacturing the unit that it will send into space.

In reality, the Miura 1 is what is called a technology demonstrator, with which the company from Elche wants test up to 70% of the technology which will subsequently apply to Miura5, the rocket with which it will really begin to carry out commercial cargo missions and whose commissioning is scheduled for 2024.

In this sense, this same week another significant advance in the company’s career was known, when it was made public that the firm had been one of the seven companies preselected to be able to operate from the Guiana Space Center (CSG) in Kourou.

The PLD Space manifesto contemplates starting in 2024 with two annual missions of Miura 5 flight from French Guiana, which they will be increasing progressively until reaching between 10 and 12 pitches year. Currently, the firm is developing the design and construction activities of the launch infrastructure in Kourou, as well as the management of operational needs.

To meet this strategic milestone, PLD Space plans to expand its technical facilities in Teruel and its plant manufacturing in Elchewhere it could locate its new facilities in the IFA extension grounds that the Generalitat has just stayed in the rescue operation of the fairgrounds and where it wants to locate a pole of innovative companies. The firm from Elche will also increase its team, which is currently made up of more than 110 professionals and expects to increase to 200 people in the coming year.

READ ALSO :   Antonio Martinez Dagneno has been appointed as the new head of SAT to replace Raquel Buenrostro

Last December the company managed to close a new financing round of 25 million, in an operation led by Arcano Partners, Aciturri and the Center for Industrial Technological Development, which brings the total capital raised by the company to more than 45 million. PLD has already accumulated a decade of experience in which it has developed its technology to become the first Spanish firm to put a rocket into space.

In this sense, the test itself carried out today is already a milestone, as the company’s president has highlighted. “We are the first private company in the history of Europe that has achieved it”, the executive pointed out. In his opinion, this success helps to place Spain in a “position of strength” in the European space race. market accelerates and we are very pleased to be the first company in Europe to have a rocket ready to fly”, Sánchez pointed out. “This fact makes our project strategic not only for our country but for Europe and is a clear reference for the profitability of investing in innovation and attracting talent”, insisted the president of the firm.