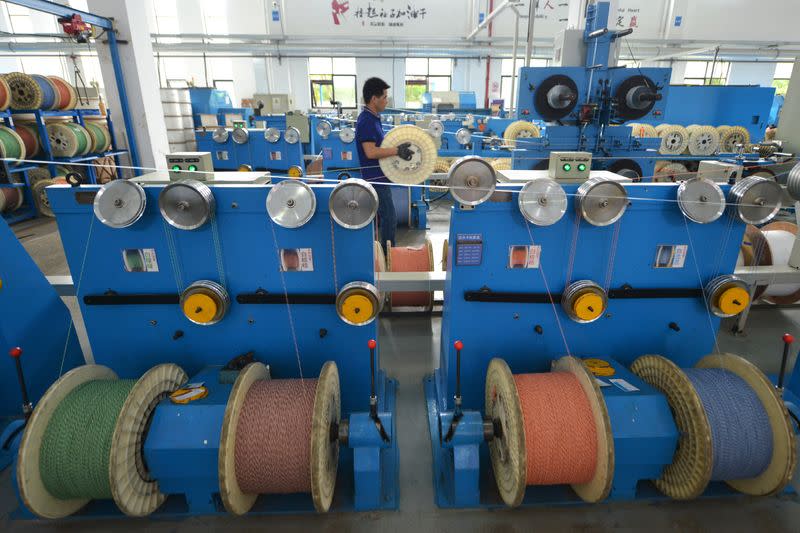 By Kevin Yao and Ellen Zhang

BEIJING, Sept 16 (Reuters) – China’s economy showed surprising strength in August, with faster-than-expected growth in factory output and retail sales underpinning the recovery from the effects of COVID-19 and heat waves, but the deepening housing slump weighed on the outlook.

The better-than-expected figures show the world’s second-largest economy gaining some steam, after narrowly escaping a contraction in the June quarter, and slightly lift prospects for a recovery for the rest of the year.

Industrial production grew 4.2% in August from a year earlier, the fastest pace since March, according to the Office for National Statistics. This figure exceeds the 3.8% increase expected by analysts in a Reuters poll and the 3.8% expansion in July.

Retail sales rose 5.4% from a year ago, the fastest pace in six months, also beating forecasts for 3.5% growth and July’s 2.7% rise.

“This is due to a lower base of comparison: the delta wave weighed on economic activity in August 2021,” said Julian Evans-Pritchard, China economist at Capital Economics.

Although the upbeat data dispels some of the pessimism that weighed on the slow recovery, which had been clouded by weak trade data and sluggish credit growth, Evans-Pritchard does not expect the strength to continue in September.

“And while the current wave of the virus may have peaked, activity will remain weak for months to come amid a deepening housing crisis, weakening exports and recurrent COVID-19 disruptions,” it said.

Investment in fixed assets grew by 5.8% in the first eight months of 2022 compared to the same period of the previous year, above the 5.5% increase forecast and above the 5.7% growth of January July.

READ ALSO :   "Shark Tank" investor Robert Herjavec criticizes the Fed for raising rates too quickly — and warns the U.S. economy could grind to a halt.

In comments following the data, National Bureau of Statistics spokesman Fu Linghui said China’s economic upturn in August was “hard-earned” thanks to supportive policies, but warned the recovery is fragile. and that global conditions remain difficult.

In contrast to the upbeat activity data, the Chinese real estate sector contracted further in August as prices, investment and home sales extended their losses.

Property investment fell 13.8% last month, the fastest pace since December 2021, according to Reuters calculations based on official data.

China’s property market, once a key engine of economic growth, has been lurching from crisis to crisis since mid-2020, after regulators stepped in to reduce developers’ excess leverage.

Housing market woes have hit the world’s second-largest economy, and policymakers are now scrambling to avoid a prolonged recession.

Home sales by surface area fell 23.0% compared to the previous year in the first eight months of the year, extending the fall of 23.1% in the first seven months, which reflects a greater fragility in demand.

In a scenario of weak consumer and business confidence, they are reluctant to expand and hire more workers. The national unemployment rate, based on a survey, fell slightly to 5.3% in August, from 5.4% in July. Youth unemployment remained high, at 18.7%, after reaching a record 19.9% ​​in July.

The authorities have announced more than 50 measures since the end of May to boost the economy and have stressed that this quarter is a critical time to act.

Expanding tax relief for small businesses and an additional quota of 200 billion yuan of re-lending for manufacturing and social service industries were announced at a cabinet meeting chaired by Premier Li Keqiang on Tuesday.

Analysts expect further disruption from the tightening of COVID-19 controls in September, ahead of the ruling Communist Party’s Congress that begins on October 16, at which President Xi Jinping is keen to break with precedent and secure a third period.

A new economic leadership team, likely to take office next year, will inherit a host of challenges, including questions of how to undo COVID-19 measures seen by many as unsustainable, the housing crisis and rising of tensions with Washington.