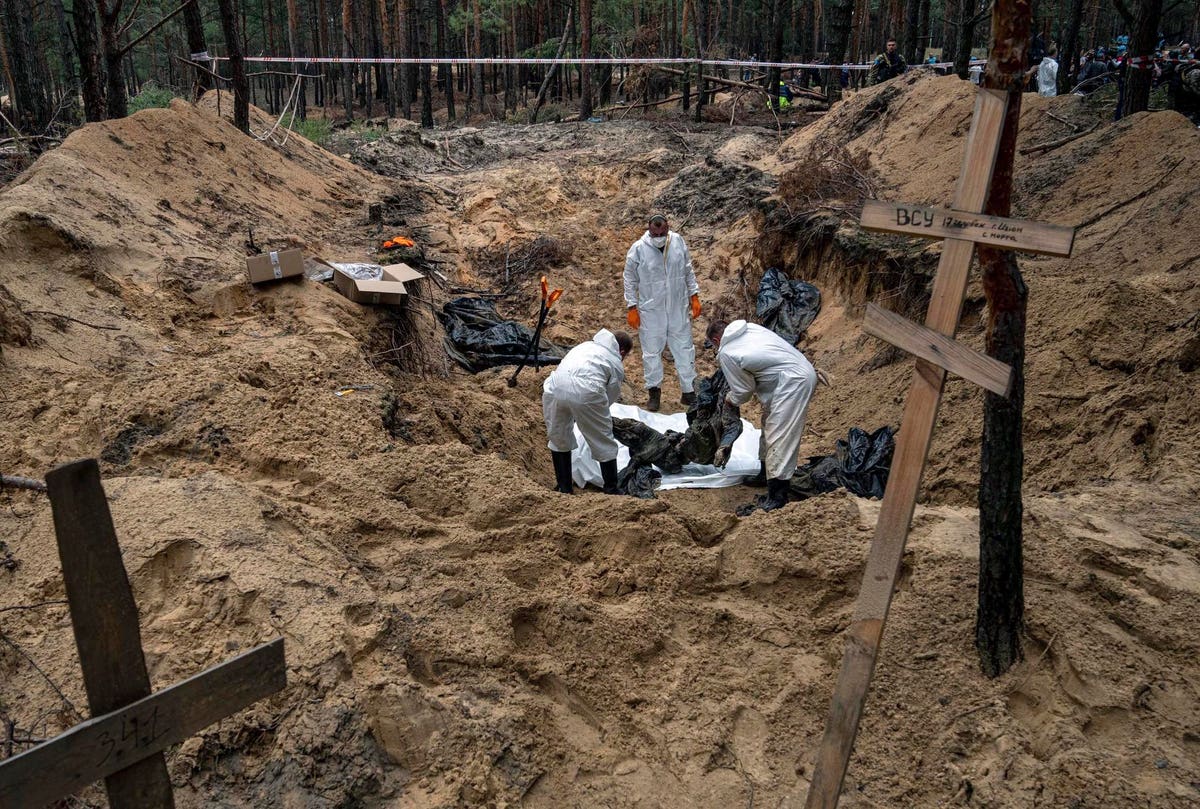 As Russia’s attack on Ukraine continues and the war rages on, reliable sources of information are critical. Forbes collects information and provides updates about the situation.

Kharkiv region: a mass grave was discovered in Izyum that had been separated from the occupation. More than 450 bodies of civilians were found buried in the forest. Among them tortured Ukrainian soldiers. Oleg Senegubov, Head of the Kharkiv Regional State Administration reported: “Of the bodies exhumed today, 99% showed signs of violent death. There are several bodies with their hands tied behind their backs and one person is buried with a rope around his neck. It is clear that these people were tortured. and execution. There are also children among those buried. ”

Ukrainian President Volodymyr Zelensky recorded a video message about the Izyum tragedy addressed to Europe, America, all world figures and international organizations: Today one thing is missing: Recognizing Russia as a state sponsor of terrorismHe said: “Russia has already become the largest source of terrorism in the world and no other terrorist force leaves so many dead behind. This must be recognized legally. We must act so that Bucha, Mariupol and Izyum do not happen again.”

Dnipropetrovsk region. The Russian invaders bombarded four towns with BM-21 “Grad” missiles and heavy artillery. in Nikopol, The bombing resulted in the injury of one person and damage to 11 high-rise and private buildings, a kindergarten, a school, gas stoves and power lines. Three high-rise buildings and a shop in the Chervonogrihorivska community were damaged. in Kryvyi Rih, Russian forces directed their missiles at vital infrastructure, causing severe damage to hydraulic installations, According to the Telegram channel of Valentin Reznichenko, head of the Dnipropetrovsk Regional State Administration.

Kharkiv and the Kharkiv region. The missiles hit the Slobidskyi and Kyivskyi districts of the city of Kharkiv. The result of the bombing Two adults and two children were injured by shrapnel, and a civilian building and communications infrastructure were damaged. The Russian army bombed the settlements of the recently liberated Kharkiv region in the Kobyansk and Izyum regions. During that attack, ten people were injured in Kobyansk, including children, and one woman was wounded in the Izyum region, according to the Telegram channel of Oleg Senegbod, head of the Kharkiv Regional State Administration.

Ukraine ranked third in the 2022 Global Crypto Adoption Index, according to research by the analysis firm Chainalysis. The Ministry of Digital Transformation of Ukraine, together with market representatives, has been working for three years to legalize the crypto industry in Ukraine in order to create a legal environment for business development. In March, President Volodymyr Zelensky signed the “Virtual Assets” Act, which enables Ukraine to launch a legal market for virtual assets and take cryptocurrency transactions out of the shadows.