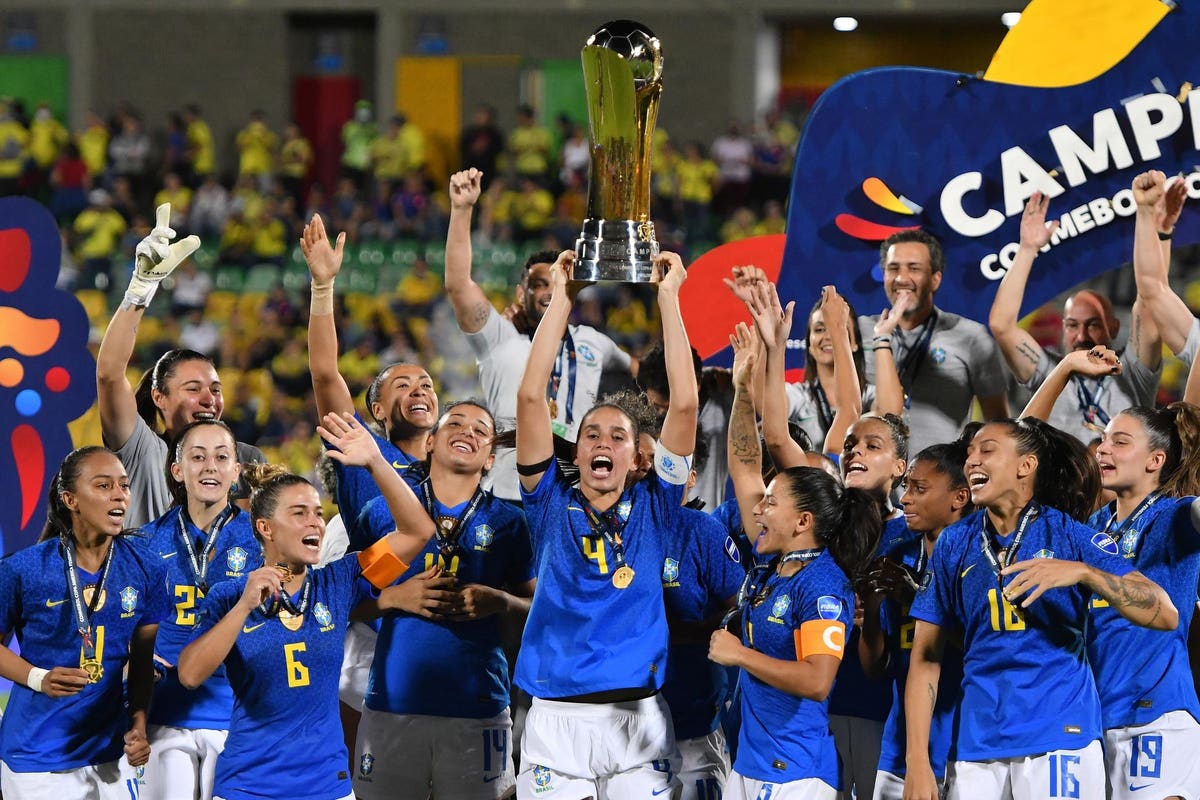 Rafaelle Souza, the captain of Brazil’s Copa America Femenina-winning team, wants more of her international team-mates to join her in England to play in the Women’s Super League (WSL), which she says is the strongest league in the world.

Unlike the host of South Americans plying their trade in the men’s Premier League, the 31-year-old defender was only the third Brazilian to play in the English game’s top flight since the league’s inception in 2011, following in the footsteps of Ester, who played 10 times for Chelsea in 2013 , and her current international teammate Ivana Fuso, who played twelve times for Manchester United between 2020 and 2022.

This summer, Venezuelan star Denya Castellanos became the first South American from outside Brazil to sign for a Women’s Super League club since Christiane Endler’s brief spell at Chelsea in 2014, while Brazilian teenager Giovana Queiroz, who played on loan at Everton, also joined the league. signed last week from Barcelona Arsenal.

Rafaelle, who joined Arsenal in January, is keen to see more poised players from the continent join her in England. “I spoke to some Brazilian players,” she told me. “They’re watching what’s going on here, they’re really enjoying this league, it’s a dream league for them.”

“Also for the other South Americans. I think they really like the league here. We (in England) are one of the strongest leagues in Europe, even in the world, and I’m really happy to be here. I want to bring more Brazilians, more South Americans , so I can speak more Portuguese and maybe a little Spanish!”

In July, Rafaelle captained Brazil at the Copa America in the absence of six-time World Player of the Year Marta. Even without their star player, she nevertheless led them to a fourth straight title, defeating hosts Colombia in the final. “I know we’ve won eight of the last nine Copa Americas, but this time without Cristiano, without Marta and without Formiga, I think it was more difficult.

“Also, the level of the other countries of the South American continent was higher. For us it was like a big win. A lot of people doubted us because we didn’t have the players and didn’t believe in the new generations of the Brazilian national team. I think we showed on the field that we are still as good team, we still have a lot of good young players and we won the title without conceding a goal, so for me as a captain, as a defender, it was a great achievement.”

Victory in the Copa America means Brazil will face UEFA Women’s Euro winners England in the first-ever Finalissimo, a new competition that pits the European and South American champions against each other in a one-off showdown to be played. in Europe next February.

Rafaella’s Arsenal defensive partner Leah Williamson led England to victory and the Brazilian can’t wait to face her. “It’s going to be a really good game, an amazing game for us. I’m so excited about the game. I talked to my teammates in the national team, they’re really excited about this game. It’s also possible.” be really fun to play against these guys here, but I know it will be a tough game for us, they have a good team. With all the fans here in England, it will be a tough game for us.”

After signing Arsenal on a free transfer from Chinese side Changchun Zhuoyue in January, injury and illness limited Rafaelle to just four league starts last season. The club also finished without a trophy after initially struggling in four competitions. Now Rafaelle is fully fit and with full preparation for the season behind him.

“I feel really great, now I feel really ready. When I got here, I came from China from a long vacation. I think I wasn’t ready at the beginning of the year, but now I feel like we’re ready.” everyone is ready. I know we have a lot of games to play, but I think we have a good team. We trained really well. I think we’ll be ready for a big season ahead of us.”

“I think one of the reasons I got the injury was because I didn’t have a real pre-season. I came in mid-season and I just wanted to help the club as much as I could, but unfortunately. I got injured. Now I feel I’m ready, I came from a good Copa America. I feel mentally prepared. It was really hard to be here all season and not play as much as I could. Now I’m really excited, I’m really pumped!”

Arsenal took last year’s title fight to the final day, but eventually lost to Chelsea, the champions of the last three years. Rafaelle is undaunted by the challenge to topple her London rivals. “I really believe in our team. We were so close last season and now we have a chance to do even better. I know Chelsea bought a lot of players but we also got players at the start of the year.” I am one of them and I think we are ready now. We also have Lina (Hurtig) now, she’s a really good player.”

Having played in the National Women’s Soccer League (NWSL) with the Houston Dash, as well as her native Brazil and China, Rafaelle now lives on four continents. When asked to assess the relative strength of the women’s leagues she has appeared in, she is torn between two in particular.

“That’s a good question! I’m between the United States and England. I know the US has a really strong league, but only with a few teams. I feel like here (in England) we have more teams that are really strong because they have players from all over Europe and the whole world, so the level is really high.”

“Also the standards of the league are really high so for a player to come and play in this league they have to be really good and I think that raises the bar. I’m really happy to be here, it means they can be in this league but overall I would say England because all the teams are almost at the same level. From the lowest club last season to the best, they are really good teams and I think anyone can win the league.”

However, she dismisses concerns that she might not be able to adapt to the physicality of the English game. “It wasn’t difficult for me because I’m used to playing with that intensity when I’m with the national team, but I think in the last six months since I’ve been here, I’ve really learned about the league and I’ve learned about the players.” This was really worth it for me because now I feel like I’m ready to go play games.”

“When I came here I didn’t really have a good idea about the teams, the level or the intensity. Now I feel ready, I know all the teams, I know the atmosphere, I got to know the fans to get to know the club. I feel we are really ready to play and I feel comfortable and confident to play here now with Arsenal.”